ZeneSzó Journal of the Association of Hungarian Choris, Orchestras and Ensembles – KÓTA, 16-18, volume 27/8

Tamás Horváth (engineer), with whom I started to discuss the deficiencies and possibilities of the flute, became my student in 2014. We started brainstorming and working on a solution how the flute sound could be improved. Several ideas were born from this effective co-operation and we wanted to realize them. Tamás started to design the components digitally, and we had a turner make the first prototypes of these improved headjoints. I practiced and played the flute for many hours to test the new inserts and used the tuner to collect information about their effectiveness. Having worked together for several years, our invention, the “Reform Flute Head” was born and acknowledged by the Hungarian Intellectual Property Office on April 28, 2017. I played in the Symphonic Orchestra of Pécs for thirty-one years, then retired from the Pannon Philharmonic. During my career I had to make a compromise with the drawbacks of the Boehm flute. I was convinced that the flat tuner surface could not produce each sound equally clearly. However, I could not deal with my hypothesis during my active years.

Why does the great, 170 years old invention of Theobald Boehm need to be reformed?

Since the creation of the Boehm-flute our world had seen many improvements. The most recent results of the science of acoustics and the opportunities of computer aided design raised new questions, improved our knowledge and created possibilities to investigate the flute further. Acoustic engineers have discovered that the stationary waves occuring in a circular pipe are altered at its end. This alteration is due to the waves’ contact with the air surrounding the body of the instrument. The phenomenon of sound propagation had been defined first in 1948 by Levine and Schwinger at Harvard University, then it was also described in an independent research by Norris and Scheng (University of New Jersey) in 1989. In these studies it has been proven that waves of higher sounds propagate further and waves belonging to lower sounds propagate less from the end of the tube. During these researches It has also been evidenced that the flute is an aerophone instrument with the physical attributes of a cylindrical tube open at both ends.

Having analyzed these studies, I came to the conclusion if the stationary waves propagate from the far end of the flute then they would need proper space to propagate at the headjoint as well. However, the flute’s head is closed by a crown and a stopper. To ensure end correction at the head, the traditional stopper needs to be redesigned.

We have already discussed that end correction depends on the pitch of the produced notes. The flat surface used traditionally in a stopper does not correspond with the physical needs of these sound waves.

The shape of this sunken surface is of great importance. In the past 40 years there have been several patents experimenting with a new three dimensioned stopper. Among these American, French, Japanese English and innovations the latest is the Japanese one from 2001. It could have spread since then, however, just as the other previous endeavors, it has not been produced and presented to the world. Why haven’t these inventions introduced to the greater audience? Because they do not procude a better sound than the flat tuner surface.

We have also experimented with several different geometrical shapes. During our investigations the produced sounds have been measured and tested with a tuner. Therefore only such stoppers have been released for further testing which showed better results than the traditional ones.

While perfectioning our tuning plug, we have used materials traditionally known in the production of music instruments such as copper, silver, ebony, grenadilla, cocobolo wood and bones. But we have also applied materials produced by the modern industry like silicone, steel, titanium and zirconium. Both the design and the production of these inserts were aided by a specific software and 3D printing. We have created headjoint inserts which revolutionize the 170 years old Boehm flute. 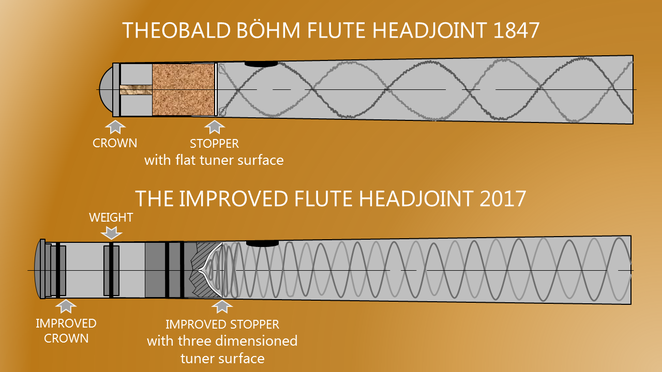 Our invention is a four segment flute head, which is radically different from the traditional heads.

Both flautists and their audience notice the difference in the music, and these new attributes are also measurable. Our testers have confirmed the benefits of the new headjoints, and the positive attributes have also been validated by the official report of the acoustic investigations performed by the Budapest University of Technology and Economics.

The invention comprises of the following units

Our improved stopper is characterized by a specific three dimensional cylindrical body.

The most significant part of our invention is the surface of the stopper. As opposed to the traditional flat surfaced tuning plugs, our version has a three dimensional cylindrical body. As the tuning surface is responsible for the overall frequency of the instrument, we have designed stoppers of various sizes.

While the flute’s timbre depends on the stopper’s surface, overall volume is influenced by the quality and the composition of the stopper’s material. We have worked with various materials and created both homogenous and alloyed tuning plugs. Stoppers are available on the market in different materials. We have also used various types of wood and bone besides metal alloys.

When comparing our innovation to a traditional flute, the instrument comprising the improved stopper and crown has a much better sound quality. Phonation is easier. The same amount of in-blown air results in a stronger, more dynamic, much clearer and more flexible sound. It has become a lot easier to play forte or piano. The flautist has been freed from unnecessary tone compensation; intonation is simple and smooth.

Large-interval slurs and leaps can also be performed easier. It does no longer pose any difficulty to play low notes loudly and high notes softly. Our stopper makes a difference. We provide a wide range of selection from which anyone – from beginners to professionals – can find the stopper most fit for their needs.

The present invention (applying a cylindrical stopper and an open crown) makes the threaded sleeve obsolete. The new conical, tube-like crown enhances musical perception on the left ear side, as the flute emits sound also in the left-hand direction, helping the flautist control the sound even when playing in tutti.

The balance weight is to be placed to the resonator cavity between the stopper and the crown.

The flute sound can be modified by applying weights made of different materials. Which material is used, depends on the material quality of the flute and on the artistic needs of the flautist. There is a wide range of metals or metal alloys to choose from. Our reinforcing weight balances out the possible weaknesses of the instrument. It can also help produce fuller, richer or more colourful sound, based on the player’s intentions.

As the cork is removed from the headjoint, there is no direct connection between the stopper and the crown. This innovation enables the production of special, longer headjoints. The extended headjoint can be produced in different geometrical forms. If we want to modify the flute quickly, the innovative headjoint can be connected to the original headjoint, as an external extension. We can choose from a thick or a thin-walled version. This extension can be applied to any flutes. Another option is to build a headjoint longer than the traditional one.

The enlarged resonator cavity functions as an amplifier if our innovative open crown is attached to the flute. As the headjoint is longer and the resonator cavity is larger, sound is amplified and more intense.

These advantages of the extended headjoint are best used when the four innovative segments are applied simultaneously.

We can best enjoy the benefits of the innovative headjoints, if the four segments are applied simultaneously.

During the tests we have used two different flutes: a Trevor James Cantabile flute with a 925 sterling silver head and a Yamaha 511, closed hole, 800 silver plated flute with a C foot joint.

The official sound analysis performed by the Budapest University of Technology and Economics validated our positive experiences: with the improved stopper notes are launched quicker (also while playing lighter) and volume can be greater by 3 to 6 dB. As overtones are richer, the sound of the flute is more powerful and much fuller.

Please find and extract from the expert report:

“The greatest difference between the newly invented flute heads and the traditional one can be observed when playing the note F#1. With the traditional head the note is launched much slower with piano dynamics than with any of the reform heads. When analyzing notes produced by different flute heads, we can observe that not only the speed of how the notes are launched can change, but there are also differences in what order the various overtones appear. Let’s take F#1 played with forte dynamics as an example. When played with steel, bone or silver stopper the third overtone (a pure quint) is the first to appear next to the fundamental harmonics, while the octave appears first in case of cocobolo and titanium plugs (and not the quint). When F#1 is played by a traditional stopper plug, both the octave and the quint are built up simultaneously, at the same time.”

Our invention can be applied to any type of the Boehm-flutes. Each of the segments may be used individually. It is sufficient to build in only the stopper to student flutes, as this is the most important unit of the invention. When redimensioned properly, the new units can be produced and applied for any transverse flutes, from piccolo to bass flute.

With the help of our invention the flute sounds brighter, fuller, richer and more colourful. By applying the new units, musicians can enjoy an instrument of better quality and of a more resonant sound, with improved dynamics and volume. As one of our volunteers, a professional flautist states: „Less work with the flute but still a more beautiful sound.”